My best friend over at Hide the Cupcakes has set out a challenge. Lose 15 pounds by Christmas. Seems like a daunting task. But there are what 8 weeks or something until Christmas? So what, 2 pounds a week? I can do that. Or at least, I think I can.

There was a point in my adult life when I was about a 5/6 or 7/8 and right around 145 pounds. I loved myself then! But it took a lot of hard work. I lived on the third floor of my dorm (which was the highest it went) and took the stairs unless I had laundry. I played racquetball 4 days a week. I ate healthier.

Speaking of eating, I know that I can not give up the foods I love. But instead I just need to develop some will power. Just because its in the house, does not mean I have to eat ALL of it. This has been a struggle for me my whole life. Isn't the first step acknowledging there is a problem? Well there is. I love food. Specifically if its something *I* have baked myself.

Things I will be doing to achieve this goal:
*disclaimer - I am still nursing so can not truly diet. But its going to be the difference between eating good foods and yummy, creamy not so good for you foods. 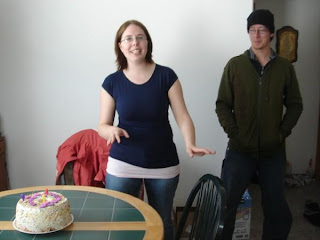 Both pictures are pre-kids. First one is my 23rd birthday. I got pregnant and month later. The second one is from the summer of 2007 before I met Jesse. In both of these pictures I am probably around 155 or so. Realistically I don't expect to be where I was before kids. My hips are bigger as with other parts. But there is no reason that I need to carry around this extra weight. I want to look and FEEL sexy again. So, whats stopping you?
Posted by Grace at 10:41 AM

Email ThisBlogThis!Share to TwitterShare to FacebookShare to Pinterest
Labels: weightloss