Thats right... an unassisted birth. After two c sections. Say what?? Yeah. After being told with my first that I had a "small pelvis" and "too big" of a baby, I did it. I gave birth naturally. And honestly, I would never put myself though that again. There won't be a next time, but if there were, I would have drugs... and lots of them!


I went into labor at 3:30 on Sat morning. Contractions, were 20 mins apart for about 22 hours. Around 2am on Sunday I woke Jesse up. I had gone from early labor to active, contractions were still only about 10 mins apart. Around 6am my water broke, nice and clear. We had been planning an unassisted birth, but knew we could come in to the hospital and still get a vaginal delivery (side note, I've had two caesarean births and could not find a provider that would straight up tell me I could have a trial of labor). By this point my body was pushing for me. And I was screaming every time. My throat is a bit sore. We figured out I had a bit of a cervical lip and so Jesse started helping me. We tried several different positions in the birth pool, then moved to our shower, then moved to the boys shower. When we ran out of warm water while I was on hands and knees, I was going to get out. I moved into a squatting position and started screaming at Jesse that he was coming. Holy ring of fire!!! Two good pushes and his head was out, two more and out came the rest of his body. He did have the cord around his neck, and instantly pooped on me. The big boys slept through EVERYTHING until they heard the baby cry at 7:25am.

Things did get a bit scary afterwards. Went into the hospital about 3 hours after he was born and on the way in I passed out in the car. Jesse even pulled over and called 911. The reason we didn't call the paramedics from our house, is we wanted to go to the hospital my dr is with, and not the local one. Got to the hospital and I get out of the car and just gush blood everywhere. I had a post partum hemorrhage, just like with Levi, but not as bad. Baby checked out fine, after a dose of pitocin, I am doing fine. I am the proud owner of a pair of hospital scrubs. :-) I did also tear, but not where I thought I would have. I tore on the right side up to my labia. So I am sporting some stitches too. 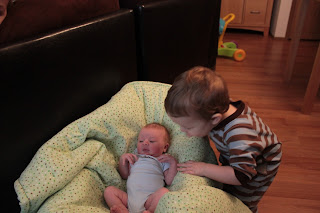