How I spent my Sunday evening

I can tell you, it was NOTHING like I imagined it would be. Jesse cleaned the kitchen, we both picked up the living room, and then he started dinner. Tacos on corn shells. Mmm. Levi didn't want the meat or rice, but could have eaten his weight in black beans. It was smeared all over his face, everywhere. While sitting in his booster seat at the kitchen table, he put his feet up on the table and pushed. The end result was him falling backwards, splitting the back of his head open and mommy calling 911.

I am SO thankful that he missed the microwave cart that sits under the breakfast bar behind the table. Seeing him lying there, all I could hope for was that it was just blood. Nothing grey. I may have even silently prayed that. I started grabbing the towels and telling Jesse he needed to start applying pressure to it, that I would call 911. He said he would, but I knew he would have to ask me for information and it was just easier if I did it.

I was calmer than I though I would be, even though the dispatcher had to tell me twice to calm down. It was more that I was talking very fast, which I am totally aware, is not helpful to them. I got them all the information without having to be asked for it twice. Waiting for the medics to arrive felt like eternity. This was one of those few times that I really hate living out of town.

The medics arrive and were really nice. Very reassuring that these things happen. Levi finally stopped screaming, and as much as his screaming broke my heart, I wanted to hear it. He didn't like momma applying pressure to his owie. At this point, he started to get a bit sleepy, and that was concerning to me. So we rode the ambulance into town. Jesse and Jacob stayed behind and were going to come pick us up later.

4 staples later, here is the back of my little boys head 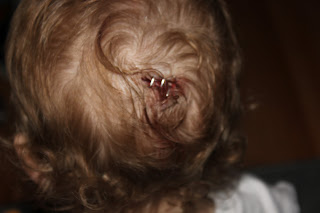 He took everything like a champ. Got home and after a bit of tylenol and "ba" (bottle with milk) he went right to sleep. Jesse stayed up and got up with him a few hours later to make sure he could be woken up. All is good, and before I know it, he will be back to terrorizing my house.